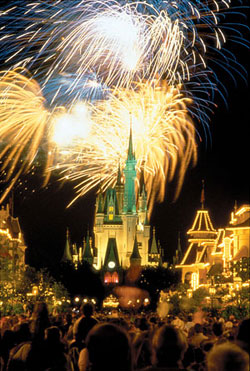 We had a great time at Disney World! My hats off to the XYL for a ton of research and planning that went into the trip. One resource that really paid off was the PassPorter’s Walt Disney World 2009: The Unique Travel Guide, Planner, Organizer, Journal, and Keepsake! by Jennifer and Dave Marx. While I had a few other Disney books on my Kindle, the PassPorter was a veritable pirate’s treasure trove of advice and tips that did the most for making our trip and absolute, unqualified success.

We opted to take a direct flight for Kansas City to Orlando on Southwest. I don’t think it was the cheapest flight and Southwest has their quirky seating policy. However, with the kids (a 4 year old and a 8 month old) a direct flight was the best option. Fortunately, those traveling with small children get to board first, so even with Southwest’s cattle call seating we were able to keep the family intact.

Transportation from Orlando International to Disney World was via Disney’s own bus service. When staying at a Disney resort, this is a great service. Again, the XYL doing the research ahead time was able to get special tags for our checked luggage so we were able to bypass the baggage carousel and head straight for the Disney Express. Our baggage would then be retrieved by Disney and taken directly to our room at the resort.

The ride to our resort, Disney’s Animal Kingdom Lodge, was quick. The bus was equipped with overhead TVs playing an introduction video explaining check in at the resorts and other information. We arrived at the Animal Kingdom Lodge around 1pm and were able to quickly check in and head to our room. The room had two queen beds and overlooked the animal reserve that surrounded the resort. Giraffes, zebras, and other animals were grazing in the savanna like area a mere 50 yards away.

The XYL had also done some research on the meal plan that Disney offers. It is a bit complicated, but worth understanding. With a little bit of planning, opting for the meal plan can save quite a bit of money. We went down to the resort’s food court to grab a quick lunch and make sure our meal plans were working correctly. Then it was off to the resort’s bus stops to head to the Magic Kingdom.

Disney World has a massive transportation system that is primarily made up of buses, but there are also water taxis and of course the monorail. From resorts, you can travel to any of the parks (Magic Kingdom, Epcot, Hollywood Studios, and Animal Kingdom). From each park, you can travel to any of the resorts. Things get tricky if you want to travel from one resort to another (like to go to one of their restaurants or just look around). It requires you to first go to a park and then catch another mode of transportation to that specific resort. Things become complicated towards nighttime when parks start closing as transportation usually only runs to the parks for only one hour after closing. There are several iPhone/iPod Touch apps that track park opening and closing times which we used several time to make sure we didn’t end up going to a park in order to catch a bus that was no longer running. Some resorts are right on the monorail which makes life a breeze to get to both the Magic Kingdom and Epcot. Despite the complexity of the transportation system, you rarely wait longer than 20 minutes and the bus drivers (boat drivers, etc.) are all extremely helpful to help you get where you want to go.

And with that point I need to stress that every Disney employee (or as Disney calls them: Cast Members) is extremely helpful. From the bus drivers, hotel clerks, maids, restaurant waiters, store clerks, park security, ticket takers, and the staff members in the park. They all have an excellent attitude and do their best to make sure you are happy. An this is really what makes Disney World a top notch vacation destination. What makes the difference for Disney is the quality of their employees. All are dedicated to making your experience the best it can possibly be.

During our stay we traveled to all the parks. I most enjoyed the Magic Kingdom. Hollywood Studios would probably be my next favorite – although we didn’t get to spend as much time there as we wanted. All the parks were quite busy during the pre-Christmas days. Going early or staying late helped avoid the crowds. Also one park a day will have an early opening or late closing just for resort guests – which really helps.

Disney has many excellent restaurants that can get quite fancy but are also kid friendly. We enjoyed several of the finer restaurants like the Artist’s Point at the Wilderness Lodge and the restaurant on the 15th floor of the Contemporary resort (the California Grill) were we were able to enjoy the Magic Kingdom’s firework show from the comfort of our window-view table. There are also dining events specifically geared to allow the kids meet the many Disney characters. Our 4 year old daughter loved these, as she was able to meet just about everyone from Mary Poppins to June from Little Einsteins. Her highlight was the princess breakfast at the Cinderella Castle. She got to meet Cinderella downstairs and then most of all the rest of the princesses during breakfast (Sleeping Beauty, Snow White, Jasmine, and Ariel). While costs can be steep, effective use of the meal plan can really make it affordable.

Disney also affords the opportunity for the kids (and sometimes the adults) to get made-up in a certain Disney theme. We first took advantage of this with the Pirate’s League where individuals are able to get made-up as pirates like you’d find on the Pirate’s of the Caribbean (my favorite ride). The four year old was made up to look like Captain Hook, to include the red coat, eye patch, and sword. She had a blast. The Disney folks involved in the process “stay in character” and act like they are recruiting you to become a pirate, give you a pirate name, educate you in pirate lore and vocabulary, and then outfit you with a bit of pirate treasure. Again, the Disney employees are amazing in this process and really help to create the illusion. Towards the end of our stay, the four year old went to the Bibbidi Bobbidi Boutique (aka from the Cinderella story) were Fairy Godmothers make-over girls into one of the many Disney princesses. My daughter chose Aurora (aka Sleeping Beauty) and got to spend the remainder of the day in her princess dress and crown.

The whole Disney experience was excellent. Although it was expensive at times, I always felt I was getting great value and with the XYL’s research we saved money were we could. What really helped out on the finance side was the incredible deal Disney offers to the military members. My park ticket was free for 5 days. In addition, I was able to buy my family members 5 day tickets for half the normal price. A big thank you to Disney for that!

Would I take the family back? An absolute YES! Perhaps when the eight month old is four, we’ll head back. Next time I’d like to stay a little longer and probably we will try to go in the off-season to take advantage of smaller crowds.

Did I use amateur radio? Yes – a little bit. There is an excellent 2M repeater that gave great coverage across the parks. When the XYL and I had to split up, we were easily able to use our HTs to keep in touch.

One thought on “Hoop-Dee-Doo and Disney Too!”