Back in early October I finally strung an HF antenna here at the Kansas QTH. The antenna was a RadioWavz End Fed Zep. The performance was mixed and I never did get it to load on 75M. I am a believer in the magic of a dipole (132′ fed with ladderline). But the geography of the Kansas QTH would really only support a dipole running east/west and radiating north/south… not what I wanted. The End Fed Zep was a compromise allowing me to make the antenna run north/south and radiating east/west. As I said, the performance was lacking. In comes the Loop Skywire. A past QST article talks about setting up a horizontal loop: The Skywire Loop, November 1985.

The author, Dave Fischer (W7FB) avoids theory and talks about just the specifics of construction and antenna performance. The basic principles of setting up the horizontal loop include its horizontal position over ground and maximizing the enclosed area within the loop. Ideally, the loop is installed as a circle – but reality tends to make it look more like a square… a compromise between number of skyhooks/antenna wire supports and maximum enclosed area. Ideal height above ground is 40 feet, but the higher the better. Like most wire antennas that you try to use beyond their fundamental harmonic, it is recommended you feed the loop with ladderline to minimize feedline loss. To determine the length of wire required for the loop divide 1005 by your fundamental frequency in MHz. If you set up a loop for 80M, it should also provide good performance from 80M up to 10M. The loop should radiate omnidirectionally and greatly minimize local RF noise. It’s low take off angle also supports good DX performance.

At the recent hamfest I went to in Kansas City, I purchased two 150′ rolls of #14 flex-weave copper antenna wire as well as a few 100′ rolls 3/32″ black Dacron rope. From MFJ I had a 6-pack of ceramic insulators. I had about 75′ of 300-omh ladderline as well as a ladderline feedpoint insulator. Along with my CVS19 Pneumatic Antenna Launcher – I was ready to fly this skywire. 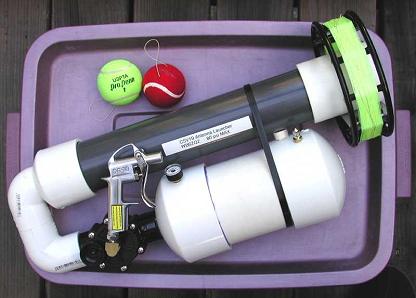 Installation took all afternoon, but the weather was great and I took my time. I ended up with 6 antenna supports, trying my best to make it as circular as possible. My CVS19 Launcher continues to perform well. My bicycle pump broke so I switched to the 12v roadside tire pump in the XYL’s emergency auto kit. This made for a quick turn around for prepping the CSV19 for successive antenna wie support lines. Setting up most of the ceramic insulators as “floating” allowed me to apportion the copper wire as needed around the loop. In the end, my loop was a bit less than 300′ and had the shape of a long oval rather than a square (or circle).

After connecting a 4:1 voltage balun to the ladderline and running coax to my LDG AT-200 Pro tuner I was on the air. My first observation was that the antenna was very quiet. Were previously I had S3 to S5 background noise, the noise floor dropped to S1 or in some cases was completely gone. The loop tunes easily from 80M to 10M.

Another indicator of success – a 20M QSO with my dad, KD6EUG, in California. A goal that has been on my list for almost a year. I was also able to work stations in British Columbia, Maine, Michigan, and Oklahoma. There are still a few more adjustments I want to make on the loop, but so far I am pretty happy with it and look forward to seeing what more it can do. I guess now I need to make a QSL card for the Leavenworth, KS QTH so I can send one to KD6EUG.

2 thoughts on “Launching The Loop Skywire”