That delicious but much derided precooked canned meat treat – Spam. Produced by Hormel Foods and introduced before World War II, Spam hit its stride during WWII as rationing limited fresh meat. The military also took advantage of Spam’s long shelf life by making it a staple in the diet of frontline soldiers.

Continuing to serve during the Korean War, Spam was able to integrate itself into Korean cuisine – budae jjigae, a spicy stew that included chunks of Spam. I used to eat this quite a bit when I was stationed in Korea. 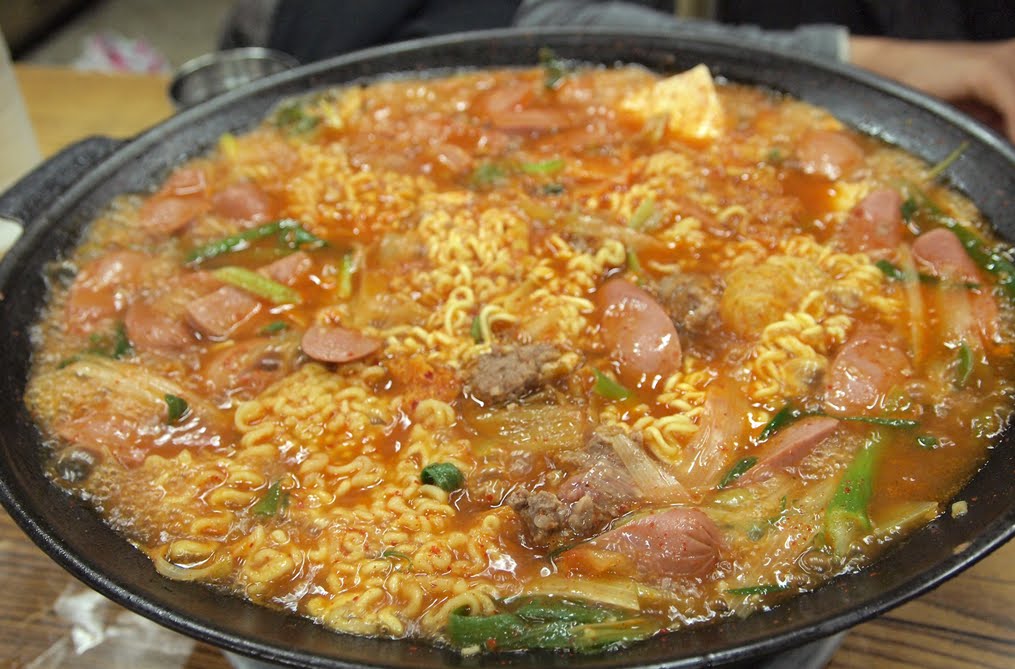 Back in the States, Spam gained a reputation of being the primary element of a white trash feast. Still, Spam presists and sold its seven billonth can back in 2007.

Back in May I traveled to Fort McCoy, Wisconsin for an Army exercise (no… they didn’t serve Spam at the exercise) and made the roadtrip from Kansas in my truck. The most direct route passed right in front of Austin, Minnesota – which, not only being the headquarters for Hormel, is home to the Spam Museum.

I am an admitted and unabashed fan of Spam. We used to eat it from time to time as children and I believe fried Spam to be a delicacy. Now I had the opportunity to visit the Mecca of Spam, which I immeditaely took advantage of.

The museum is open to the public and free of charge. It is actually quite large and well done, telling the story of Spam from its inception and through the decades. Best of all was the gift shop at the end which included variants of Spam that I had never seen before: Spam Hot & Spicy – with Tabasco flavor, Spam Jalapeño, Spam Garlic. I eagerly purchased a few tins and enjoyed them once I returned home.

The name “Spam” is the combination of the words “Spiced” and “Ham”, although there have been other meaning attributed to SPAM. The military, ever enjoying arcronomys, dubed it SPecial Army Meat. The term is also used to describe a secret Army group that is shrouded in mystery: the Society for the Protection of Angry Majors… or SPAM. This society is rumored to be a powerful and influential group much like the Bohemian Grove or the Bilderberg Group.

In 1970, Monty Python paid tribute to the impact of Spam to Britsh gastronomy during war years rationing with a sketch entitled “Spam“.

Why does this all matter? It doesn’t, of course. But I am here on Hawaii (the state with the largest consumtion of Spam per capita) supporting an Army exercise. Each morning at the hotel, with my complimentary breakfast ticket, I get a small coffee and a Hawaiian role containing egg, a strip of seaweed, and a large piece of Spam. It’s quite good!

One thought on “Let’s Talk Spam”