Ham radio and trail hiking have been a natural pair. There are a few hams (that I know of) who have stood out over the last few years in hitting the trails with their amateur radio gear.

The first is Ed, WA3WSJ. He has been out on the Appalachian Trail (or AT) numerous times and has brought along a minimalist setup to get on HF and make some contacts. Chances are that you have heard of the Appalachian Trail – it streches from Georgia to Maine and allows an individual to hike from start to finish.

Ed’s an advocate of pedestrian mobile (WA3WSJ/pm) and has published a few books that tells of his experiences and offers advice for those interested in following his footsteps. He also has established the Great Outdoor Radio Club, which offers resources to avid and aspiring radio trail men.

Another amateur radio hiker is Dennis, K1YPP. He actually completed the Apalachain Trail and also wrote a book on his expierences. Hiking from one end to the other involves reducing the backpack weight as much as possible. Dennis successfully used QRP rigs during his time on the trail.

Here is a podcast of two hams who discuss hiking the Appalacian Trail, including the use of amateur radio (ham radio) and QRP (low power, less than 5 watts) along the way. From the series at Atlanticon 2006 in Timonium, MD.

The APRS folks also are involved in activities on the Appalachian Trail (check out here and here). 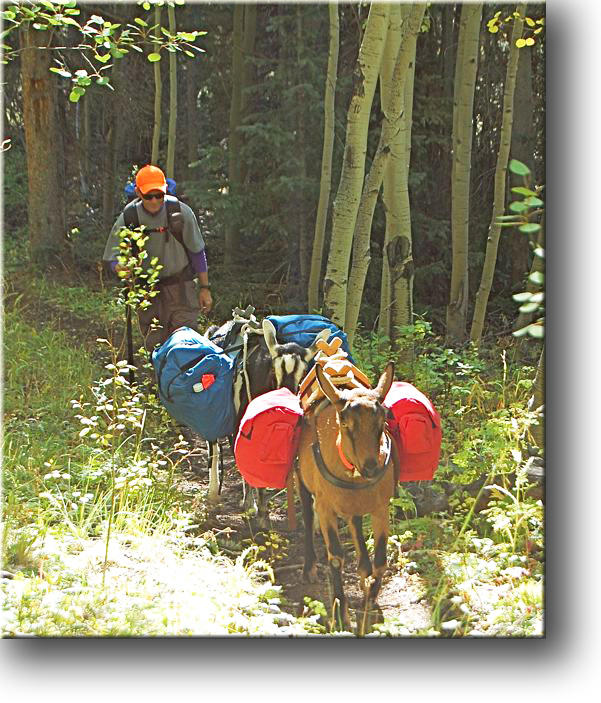 Heading west, the next major trail is the Continential Divide Trail. The trail goes from Mexico to Canada and spends a good portion of its time following the Rocky Mountains. Although not a dedicated Continential Divide Trail hiker – Steve, WG0AT, has spent plenty of time in the Rocky Mountains making amateur radio contacts. Steve’s take on hiking is a bit different as he brings two goats with him that help carry the equipment. If you have not seen his Youtube videos, then you are missing out.

Bob, K0NR, is also active in the Rockies… having most recently participated in a unique ham radio event – The 14er. Paul, W0RW, is an pedestrian mobile ham who has taken to the mountains to log contacts. However, I do not think either Steve, Bob, or Paul have actively hiked the Continental Divide Trail along with their rigs.

Further west is the Pacific Crest Trail. I was curious to find that not many hams head to the Pacific Crest Trail for hiking and QRP work either. There is a repeater guide by Bill, AA6J – but I am not sure how much of the trail he has hiked or if he brought any HF gear. The only ham I can find that has attempted the hike was Bruce, N7RR. It also looks like he did not make it all the way. Being a Californian, I am surprised that more west coast hams have not hit the trail along with their HF radio gear.

Have you had a QSO with a ham on the Appalachian Trail, Continental Divide Trail, or Pacific Crest Trail?

How do you feel about the idea of packing up a rig and heading for the mountains?